Based on my personal experience, I thought about the reason why stalking incidents never die and what we can do about it

I wrote this book only for "preventing the worst."

That means " not to be killed."
In fact the entertainment industry is pearls of wisdom about fighting against stalker.

Watching the news of victims almost every month, I thought the time has come to make them publicly known and decided to get off my backsides.

I hope this will reach to someone with fear.

“This is how I avoided being killed by stoker”
Written by Yoko Haruka
(Chikuma Shobo, 2/5/2015)
Buy this book (jump to an Amazon page)

The Widening Gap between Increasing Criticism and Growing Ignorance (1)

For the past several weeks, I have had some English articles sent, forwarded, or referred to by my friends or via SNS.
All of them were about atrocities the Japanese Imperial Army committed. I would like to review them to express my particular concerns about the widening gap between rising criticism about Japanese government’s attitude toward the comfort women issues  in the English media and growing ignorance of those global concerns in the Japanese media.

This situation was triggered by the Prime Minister Shinzo Abe’s comment at the budget committee meeting in the Diet on January 29, 2015. The Japan Times, the oldest English newspaper in Japan, immediately reported about his pledge to increase efforts to alter views abroad on Japan’s actions in World War II by disseminating the “correct” view.
The New York Times followed the very next day: “He (Abe) singled out a high school history textbook published by McGraw-Hill Education that he said contained the sort of negative portrayals that Japan must do more combat.” Quoting the Japan Times, the article illustrated how Abe “was shocked” and regrettable that “we did not protest the things we should have, or we failed to correct the things we should have.”

In fact, as Kyodo reported in November 2014, the Ministry of Foreign Affairs in Japan requested the publisher to correct the depiction of “comfort women” in the book. More recent articles have revealed that McGraw-Hill rejected the Ministry’s request and defended its writers. For instance, according to the Bloomberg news on January 30, 2015 JST, the publisher replied to Bloomberg’s question in an e-mail, “Scholars are aligned behind the historical fact of ‘comfort women’ ” and “we unequivocally stand behind the writing, research and presentation of our authors,” as was quoted in other English media.

On February 9, 2015, the Japan Times referred to Abe’s comment again, in its article about U.S. based historians’ protest against his attempt to suppress statements in U.S. and Japanese history textbooks about the comfort women. It quoted their letter to the editor in the March edition of “Perspectives on History,” the American Historical Association’s journal:
“…… the careful research in Japan, especially by (Chuo University professor) Yoshiaki Yoshimi, of Japanese government archives and the testimonials throughout Asia have rendered beyond dispute the essential features of a system that amounted to state-sponsored slavery.”

The group even warns that Abe and his allies are on a quest to eliminate references to the issue in textbooks. The fact is that in Japan the high school textbooks referred to the comfort women in 1995 mostly had such references eliminated by 2005. This kind of changes are likely to prevail in Japan as a result of active efforts of Abe and his allies to promote a peaceful image of post-war Japan by whitewashing the brutal history during the war.

As part of such efforts, Abe has been expanding his contacts with the mass media since his second inauguration in December, 2012. He spent more time on meeting with the leaders of the press and sent more people of his preferred choice to the influential posts in the related organizations and committees. One of the most notorious examples is the Chairman Katsuto Momii of NHK, Japan’s major public broadcaster. In his response to a question about the comfort women at his first press conference, Momii said that such an institution existed in “every country” and that it is only considered wrong by “today’s morality.”

“Everyone else was doing it,” or “it belongs to the past you cannot judge by today’s morality” is a typical way to evade responsibility for what was done and cannot be undone. “Let bygones be bygones” has been a widely accepted sentiment or even a virtue for the Japanese to maintain a harmony in an isolated society. We should realize that they are far from acceptable in the international community.

Rather than contributing to raising an awareness of or knowledge building for that matter, some Japanese and South Korean media have been provoking nationalistic fervor against each other. On both sides of the national boarders, more and more hatred have been voiced, making decent people sick of the fanatical and negative acceleration. 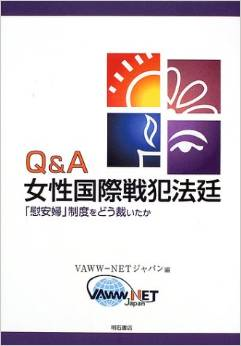 As a positive result, however, alternative media are highly motivated now to reach out to those people, providing them new perspectives while conservatives are reproducing typical denying narratives. The Japan Times’ article of March 4, 2015 showed a reflection of one of those new and valuable perspectives yet to be a mainstream in Japan. The article written by a freelance journalist KIMURA Kayoko raises a question, “Why do so few people in Japan make the link between the wider issue of sexual violence in conflict and the comfort women?” One explanation she provided was that the issue was depicted as a purely diplomatic matter between Japan and South Korea.

As she reiterated, it was when three Korean women filed a suit in Japan in December 1991 when the comfort women issue became public. They, not only charged the Japanese government with the wartime crime, but also channeled the shame they experienced for a half a century into a fundamental human rights. In the 1990s, the International Criminal Tribunals for the former Yugoslavia and Rwanda recognized rape and other forms of sexual violence as breaches of international law. And in the 2000s, “preventing sexual violence in conflict became a global human-rights and security concern.”

Prime Minister Abe stressed in his policy speech to the 189th Session of the Diet in February, 2015: “we will work to ensure that the 21st century is one in which there will be no human rights violations against women.” But those nice words, as well as “a world in which all women shine,” or “Japan will never give in to terrorism,” merely sound evasive and meaningless if he never listens to the specific women who have been appealing to the Japanese government or if his government has no effective means for dialogue with other countries concerned. In this regard, he represents the Japanese majority who neglect to make the link between the wider issue of sexual violence in conflict and the comfort women.

In contrast, it is the most significant that the former comfort women and their supporters have been developing global and contemporary perspectives. In part two of this essay, I would like to illustrate how they are linked with the women currently suffering violence in conflict and how these significant perspectives are lost in the comfort women discourse in Japan, taking examples of the misleading descriptions of the Asahi and the Sankei, Japanese newspapers representing the liberal and the conservative respectively.

Written by FUKUOKA A. A.


About 14,000 people gathered in Hibiya Park, Tokyo, on Sunday March 22, and marched around the National Diet Building and the prime minister 's official residence.

They demonstrated against Shinzo Abe's major policies over rights to collective self-defense, nuclear reactors restart, new U.S. military base in Henoko, Okinawa, and Act on the Protection of Specially Designated Secrecy and so on as was indicated by a variety of boards they held. 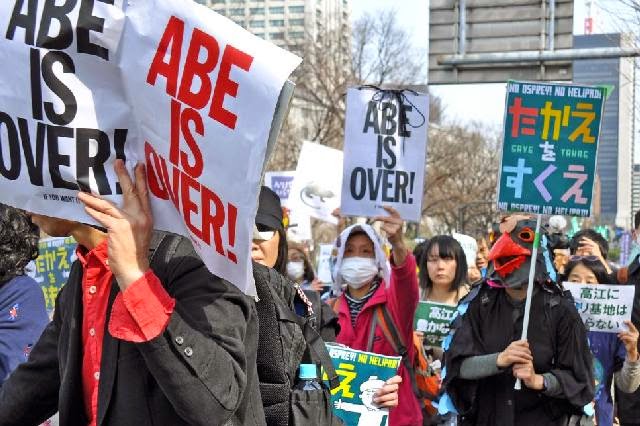 The rally was organized by the Metropolitan Coalition against Nukes and participated by a variety of people both young and old. The speakers on the stage included a 16-year-old high school girl, who believes in Japan’s pacifist constitution and a 20-year-old college student, who is an active member of Students Urgent Action for Freedom and Democracy. 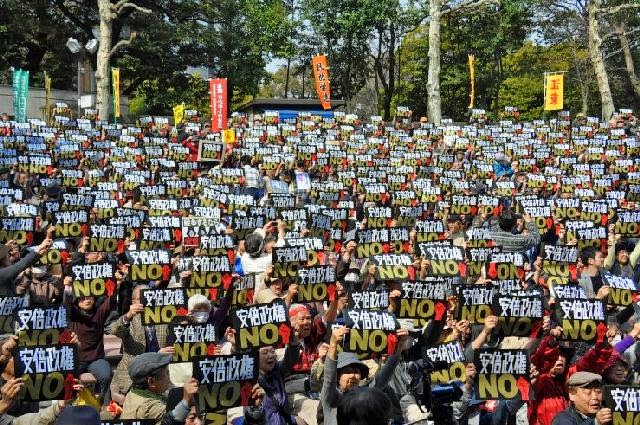 On the same day, Abe attended a graduate ceremony in a defense university in Yokosuka, Kanagawa Prefecture to express the government’s resolution to promote the right to collective defense.
He has been accelerating his moves to legally dispatch Japan’s Self Defense Forces (SDF) overseas. His coalition government has just reached a formal agreement on the outline of security legislation that would expand the scope of overseas operations by the SDF troops, marking another step toward the most drastic changes to Japan's postwar security stance. 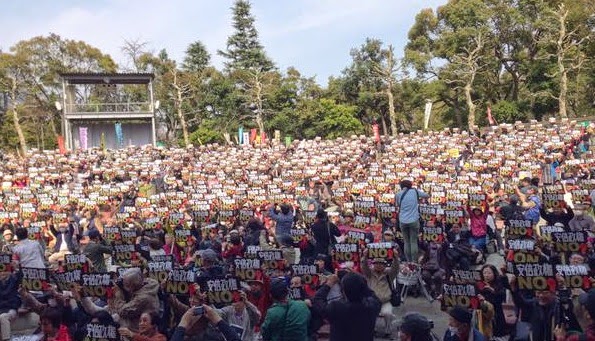 The demonstrations in Hibiya and other parts of Tokyo represented people’s earnest concerns about such right-leaning politics of Abe. He was quoted as saying "the absurd remarks are irresponsible and instigating anxiety," but it is his hawkish maneuver and unjust reinterpretation of the constitution that make an increasing number of people anxious about their future. The irresponsible prime minister apparently fail to pay due respect to his own country’s supreme law.