This Book Is an Event, Prof. Muta!

--- Book Review for “That Love Is Sexual Harassment, Boss!” 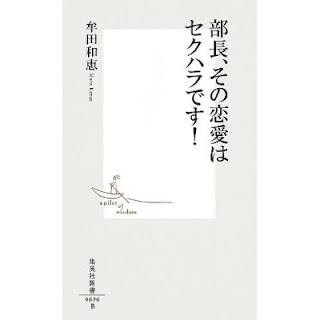 
Buy this book (jump to an Amazon page)

It’s been nearly a quarter-century since the first sexual harassment lawsuit in Japan (the Fukuoka Sexual Harassment Case in 1992). Until then there was no such term or idea of sexual harassment in this country. And one of the key players who got it entrenched here as sekuhara was Proffessor Kazue Muta, the author of this book.

You might think there must be a lot of rebukes to men in this book if Ms. Muta, a renowned feminist, says, “. . . is sexual harassment!” But, in fact, I don’t think I’m the only one who felt her compassion for those doing the harassing at the back of her deep insight. For example, she comments like this, referring to somebody accidentally saying or doing sexually discriminating things:

“If you are an ordinary man, it’s possible that you will occasionally be a little under the influence of drink, and might let slip some barnyard words in front of your female staff. That’s for sure a yellow card for sexual harassment. But when you’re sober the next morning and realize you said the wrong thing, just apologize straightforwardly. Then it will hardly be a serious affair.” (p.54)

This remark of Ms. Muta must come as such a relief to not a few people (perhaps including me).

For a long time there has been common belief that feminists are man-haters. But I believe this book demonstrates that a feminist attitude which can provide women with a comfortable work environment and support their lives will lead to a better society for men also.

Actually, many sexual harassment cases are not fundamentally black and white. But most of them end up being “black” after the longtime development of troubled relationships between colleagues, a boss and a subordinate, or a teacher and a student. (p. 136)

This book is full of practical lessons about things such as, “the deep division between men and women,” “the way things become complicated,” “sexual harassment advisories and sexual harassment warnings,” “three requirements of an office romance,” and even “in case you should be sued.”

Professor Chizuko Ueno recommends this book as “a household necessity like Home Health Handbook.” Absolutely. This is a must-read not only for men, but also for women in order to understand the feelings of “insensitive” middle-aged men.

I feel guilty that I read through the whole book with such amusument despite the matter’s life-changing seriousness.

I bet this book will be an event in the sociology world. At the end of this book there is a story of Ms. Muta’s “personal experience of secondary damage from sexual harassment,” which signals her long, hard, everlasting battle against sexual harassement.

Translated by A. Tawara
Posted by w-wan at 9:50 PM No comments:

“Women’s Thoughts” ―We Remember You 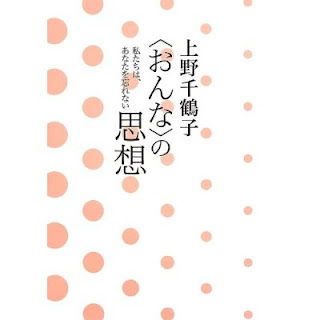 “Women’s Thoughts” ―We Remember You
Written by Chizuko Ueno
(Shueisha International, 2013/6/26)
Buy this book (jump to a Japanese Amazon page)


I’ve got a new book published: “Women’s Thoughts” ―We Remember You. It’s the first book I’ve written solely about feminism for quite a while.

I wrote brief introductions to their works on the cover page of each section. I put great effort into this book, though I say so myself.


“The words that became my body and soul” ― is how I would describe their writing. To read books is to retrace others’ experiences. I’ve been reading their books since I was young. Then, I was too young and too immature to find the right words to express myself. Even when I tried, the words I had with me were so few that they never felt right. It was then that they gave me the “women’s words” through their books. I found that these women had created their words from struggles similar to mine. It was because they were written in my mother tongue that their words touched my heart. I’d like to tell you how much I was inspired by these women who came a little ahead of me. This was my motivation to write this book.

Section Ⅰ is a collection of works by Japanese female authors. I introduced them chronologically, so you will see that they were mainly published from the 60’s to 80’s. This is because this period was the predawn of feminism and the time when “women’s thoughts” were formed. Maybe I was lucky that I developed my character in that period.

In this section, I covered Kazue Morisaki, Michiko Ishimure, Mitsu Tanaka, Taeko Toyooka and Noriko Mizuta. These five women are a little older than me. Their words touched my heart deeply. Words of male writers never touched me the way they did. Only female writers gave me words which inspired me so much. How could it be just a coincidence? I’ve lived in their era and listened to their words. I’d like to hand down what I received from them to women of the next generations.

Ⅱ．Re-interpretating the World with Gender

Some books influenced me so deeply that they don’t appear in my bibliography. It’s been a while since I had this idea. They’ve developed my theories and thoughts so deeply that they’ve become part of my body and soul, so how can I separate them from me and cite them as references for my own books? I even find it hard to cite particular sentences from them because I can’t specify which sentences inspired me. I usually borrowed thoughts and theories of other authors to create my own, but I’m not ashamed of that. The point is how and from whom I borrowed the thoughts, and how I used them to form my own ideas. The foreign books I dealt with in this book are the ones that influenced me deeply. I also introduced them chronologically.

Some readers may find it strange that I included two male philosophers in this book, Foucault and Said, although the book is titled “Women’s Thoughts.” But I’d like to interpret “Women’s Thoughts” as “the thoughts which create a borderline between men and women.” Or, more technically, they’re the thoughts that expose the system which creates a borderline between men and women. If that’s true, I can’t omit Foucault’s contribution to the exposure and can’t ignore Said in post-colonialism.

And of course, I learned a lot from the pioneers of gender theories from poststructuralism to deconstruction, such as Scott, Spivak, Sedgwick and Butler. There are those who criticize gender theories as being “imported theories,” and I’d like to respond to them with Spivak’s words. When asked if gender theories weren’t foreign words to Japanese women, she said, “We can use whatever tools available no matter who made them.”