Fundraising for Fishermen Fighting Nuclear Power in Iwaishima: The Sea is for Everyone, not for Sale 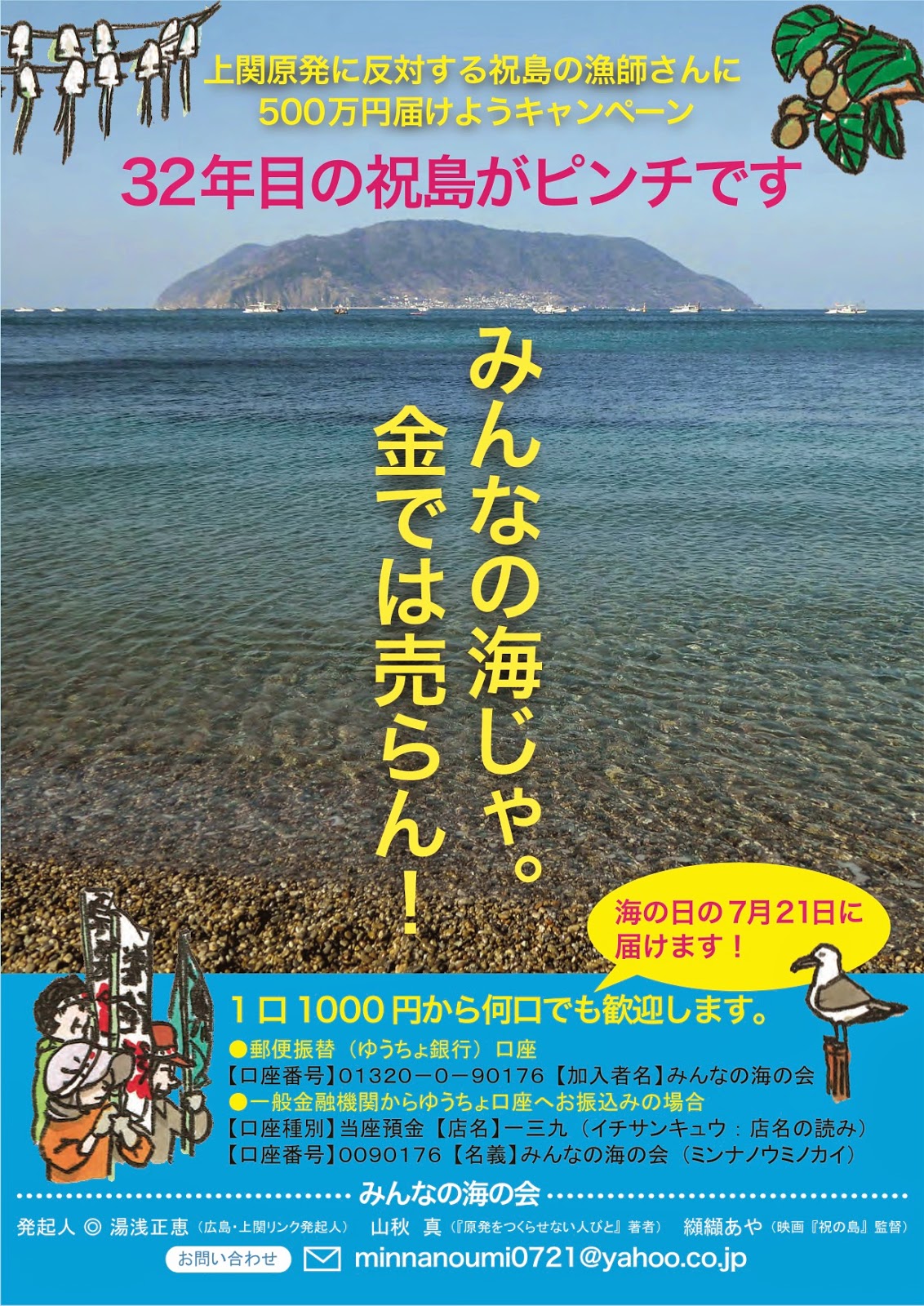 Iwaishima, a small, heart-shaped island that lies in the Inland Sea of Japan, needs your help and needs it fast.

Iwaishima Island has long faced Chugoku Electric Power’s plans to build a nuclear power plant along the Inland Sea. Ninety percent of local fishermen are united against the plans, and their resolve has been strengthened all the more since the TEPCO disaster in Fukushima. While Chugoku Electric Power has offered 1.08 billion yen as compensation, the fishermen have repeatedly refused the money as a sign of their firm stance against the nuclear plant.

In the meantime, as the local population ages and decreases, Iwaishima’s fishing business has been in decline. Individual fishermen have been making up for business losses, estimated at 10 million yen since 2013, through their own pensions. Locals worry how much longer this situation can continue, given the severe economics that surround Iwaishima fishery. Because officially turning down Chugoku Electric's compensation money requires a majority in the fishermen’s union, the need for outside financial support has become urgent.

Our goal is to raise five million yen and deliver it to Iwaishima on July 21, Marine Day, Japan's national holiday for celebrating the sea. Your financial support would be highly appreciated as the fishermen carry on their fight against nuclear power.

We ask for donations starting from one thousand yen. Please make transfers to our Japan Post Bank account.

Organized by:
Masae Yuasa (Hiroshima-Kaminoseki Link)
Shin Yamaaki (Author of "People Who Will Not Let Nuclear Plants Be Built -- From Iwaishima to the Future --")
Aya Hanabusa (Director of Houri no Shima)

(The following is a translation of an introduction by the author himself about the controversial book The Impending Era of Sons Nursing Their Parents: From the Front Lines of 28 Cases.)

If you ask Japanese people what worries them now or in the future, more than a few would mention nursing of their parents. And what if a male were to take care of his parents? How will he view his family, career, and society once the nursing is his responsibility?

My original question was, “Why is it that adult males are at a loss of words about their roles as a son when they can eloquently assert their ideals about their roles as husband or father?”  To answer this question I started researching middle-aged sons, and I eventually reached the issue of sons nursing their parents. This was the starting point of my book. I interviewed 28 men who had ended up caring for their parents at home (some without choice), and I dug into the realities of life as a care-giving son.

It was an honor for me to have Chizuko Ueno write a commentary essay in this book. She gave me her endorsement (?) as “the ideal interviewer that men could talk to without feeling embarrassed about themselves” because of my lack of wealth, social status, and distinction. My subjects did talk to me candidly, baring their souls about their marital relationships, sibling dynamics, and coziness or competition with friends or colleagues. But what emerged was not their special experience as a social minority, but a “masculine” relationship protocol that applies to all men, and its vulnerabilities and weaknesses.

Of course I would be happy if current and future caregiving sons read this book, but I would also like the females — those who may play a principle role in the world of male caregiving as a wife, sister, or a mother to be cared for — to also take a hold of this book.

Ryo Hirayama
Born in 1979 in Kanagawa. B.A. (Humanities) and M.A (Graduate School of Humanities and Sociology) from the University of Tokyo and Ph.D. from Oregon State University. His specialities are social gerontology and social psychology. He worked as a research fellow at the Japan Foundation for Aging and Health of the Tokyo Metropolitan Institute of Gerontology, and now continues his research at the former as a special research fellow of the Japan Society for the Promotion of Science. His main papers have been published in the Journal of Gerontology, Social Sciences, Journal of Family Theory & Review, etc. This is his first independent book published in the Japanese language.