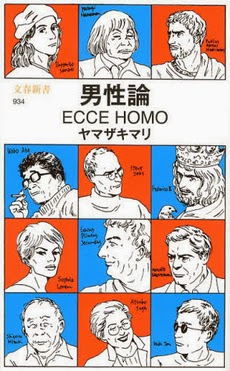 Mari Yamazaki, author of the series, talks in depth about cool guys of all ages and cultures and their extraordinary skills and fertile visions, from Hadrian and Raphael to Kobo Abe and Steve Jobs. All of them are cosmopolitan men who defied the established ways of doing things and opened up new dimensions. The lives of these men evoke the image of Yamazaki’s own life in which she went to Italy at the age of 17 and has traveled around the world since.

One of the best things we can learn from this book might be the suggestions of how we ourselves can lay a path to a new age; how every one of us can “sow seeds of renaissance,” as Yamazaki tells us while shaking up Japan’s introverted and passive mentality.

This is a powerful book, which would give a good kick up the backside to women who want to live a more ambitious life and also to men who want to come out of their shells.

The Little Mermaid Was Dressed in Men’s Clothing! 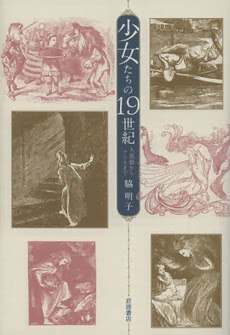 “The 19th Century for Girls – From the Little Mermaid to Alice in Wonderland”
Written by Akiko Waki
(Iwanami Shoten, 20/12/2013)

This led me to open “The Andersen’s Fairy Tales” from Iwanami Paperbook Libray (translated Suekichi Ohata). The Little Mermaid fell in love with the Prince and came to the human world, and there it says, “The Prince had them tailor men’s clothes for the Mermaid and had her accompany him when he went for an excursion on a horse. The two of them went through a fragrant forest.”

On the other hand, according to Waki, the same place in The Collected Works of World Literature for Children (translated by Hiroto Hirabayashi) version says, “The Prince made a saddle so that he could ride on a horse with the Mermaid. The two of them went through a fragrant forest.” In the original Danish version, the Mermaid is dressed in men’s clothes.

Waki notes the difference in her book. “The Hirabayashi version means that the Memaid in her feminine clothes is riding double on a horse with the Prince. In contrast, if the Prince ‘had them tailor men’s clothes for her,’ it means she was riding on a different horse and accompanying him like an attendant. This difference cannot be overlooked.”

Once we have learned that the Little Mermaid was dressed like a man, a completely different -- active and hermaphrodite – image of “Mermaid” from the traditional one comes up. When we focus on the “men’s clothes,” the teary ending of the tale could possibly be interpreted in another way.

“A Girl’s Life of One Hundred Years” by Mine Yagi

A person’s life has a distinct story. As the personal life belongs only to that person, at the same time, we can see the deep in-rooted history and the broad world.


Listening to a radio program Rajio Shinyabin (Midnight Radio Letter) which introduced the topic of “Story about Moms”, I was driven by desire to read the book “Hyakunen Mae no Shoujo (A Girl’s Life of One Hundred Years)” (Kodansha) written by Yumi Funabiki, 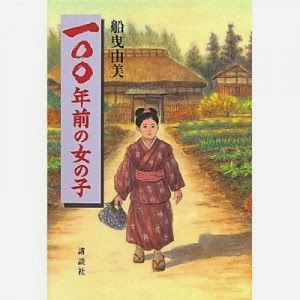 The book is a story about a girl named Tei Terasaki. The author is a freelance editor who used to serve as an editor for “Taiyo” magazine since its first edition. When she published the book, her mother Tei had just turned 100 years old. Although her mother had never talked about her personal history to her daughter before, she had burst out talking about her personal story after reaching the age of 88. The author’s lively description of her mother’s childhood life style in a village is a superb ethnological record of a Japanese village of the time that was so common everywhere in Japan.

Tei was a baby “born on a day when lightening had struck” in a village of Joshu, now Gunma prefecture, mother’s hometown where Tei was delivered. After merely a month, Tei was sent back home from her mother’s parents’ house alone with a small package of baby clothes and diapers, Tei’s grandmother on her father’s side was an extraordinarily competent woman who was able to do all the household work perfectly as well as farming and weaving. Being overwhelmed by her competence, Tei’s mother refused to return to the in-law’s house, saying “I can’t possibly do anything like her, however hard I may try.” Tei had never seen her mom ever since. Her mother’s name was never mentioned in this book. Tei’s grandmother, Yasu, ran around the village asking for breast milk to feed her granddaughter.

Several years later, her father got remarried to a women who accepted his proposal under the condition that Tei be sent out for adoption. Tei, at the age of five, was ordered around to do things such as water drawing and kitchen work by her foster parents who told her, “You are big enough to do these chores.” When her father could no longer put up seeing her in such a situation, he brought her home on the condition that she would leave home when she finished school. Tei had returned at last to the care of her loving grandma she had missed so much.

After graduating from Ashikaga Girls’ School, she left home for Tokyo alone at the age of 16. She continued to study at night school while working and eventually graduated from school, now called Shin Watado Bunka Gakuen. She started working at the YWCA and got deeply involved in Social Christian Movement, where she met a guy who would be her husband.

While she raised five children, the period of 100 years, marked by Meiji, Taisho, and Showa eras, have passed. It is also quite intriguing to read the Terasaki Family’s sequel episodes.

Suddenly Tei’s story rang a bell. Oh, I know someone like her! It’s a story of a girl’s life of 60 years. The girl’s name, this time, is Midori, a cousin of mine on my father’s side. Her personal life story is exactly the same as Tei’s, which struck me.

Midori’s mother also did not return to her in-laws’ house after spending fifty days with her baby after giving birth at her hometown. Just like Yasu, Midori’s grandmother was a very capable, strong woman, who could handle any type of work. Being unable to get along with her mother-in-law, Midori’s mother left her behind and chose the life of her own.

After graduating from high school, Midori left her homeland, Kumamoto and got a job in Osaka. Although she got married, she had tolerated with her husband’s domestic violence for years until she was able to leave him and afterwards, her husband passed away. As a single mother, she worked in Kumamoto to raise two boys doing various jobs.

One day, out of the blue, one of her sons engaged in ODA’s public construction project in Algeria called her, saying, “Mom, I found a nice house on the Internet for you. What do you think?”

While I was visiting my hometown in Kumamoto, I was asked by her to help out on this matter. She said, “I just don’t know how to handle it. Help me, please!”

Then I got involved in the negotiations about the house on behalf of her. E-mails flew back and forth among the real estate agent in Kumamoto, her son in Algeria, and myself in Kyoto. And finally, as she wished, a deal of the old small house had been done and I stood beside her while the contract was being signed.

After all those days and years, she is now living a very peaceful life, watching over her garden that is full of sunshine and currently filled with scent emitting from the pink plum blossoms. I am quite thankful to her for paying occasional visits to my mother who also lives alone in Kumamoto whenever she has time from work.

People’s lives, women’s lives, they are so diverse, But when they die, everyone is equal. It all balances out in the end.

Seeing a sign of ominous change in Japanese society nowadays, I feel I have to be ready for the coming era. How many years are left until I become 100 years old?  I do wish I would be able to weave “ｍy own original story” without taking my eyes off this transition of the time.

Original Article on the WAN Website: http://wan.or.jp/reading/?p=13014
Translated and Adapted by Yoko Hayami