Detail : Inviting Mr. Hitoshi Ogawa, philosopher often appears on TV as a speaker, we will learn the importance of thinking things with the philosophical view. The theme is "Making use of yourself to connect with society--Knowledge of philosophy and its use" Fee is 500 yen, Free child service is available (Please book in advance).

Original Article on the WAN Website
Translated and Adapted by T. Muramatsu
Posted by w-wan at 11:40 PM No comments:

Acquiring Their Own “Words” and “Voices” to Change Their Lives 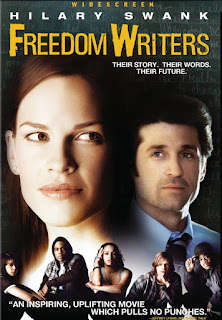 Buy this DVD from Amazon.com

Erin Gruwell, a novice high school teacher, comes in charge of a class composed of “at-risk” students.  Growing up in slums where violence and murder happen every day, the students segregate themselves into the racial groups and fight against each other in the cycle of hatred, just like adults do outside of the school. They have no hopes in their own lives and no enthusiasm to learn. Nevertheless, Erin believes the power of education and, all by herself, begins struggling to change the students’ lives. She gives her students some books to read and diaries to write about themselves, because she believes that they can understand and empathize with others through reading and writing. She tries to teach them how big the world is and how to describe themselves in their own words.
Regarding her as a just another white woman from a rich family, the students disapprove and sneer at Erin. Erin doesn’t sympathize, look down or give up on them because she knows that their attitudes towards her result from their immaturity and pain. Instead, she respects each of her students as a person and gradually, her honesty touches a chord with them. They open up their hearts to her through their own “words” and “voices” they have acquired. This story touched me deep inside.

This movie is based on a best-selling book titled The Freedom Writers Diary, which was written by actual high school students and published in 1994. The every story in it is too harsh to believe that it’s true, but that is the reason why the students’ voices are filled with hopes (I recommend this book as well as the movie).

The theme song of the movie is “A dream” by COMMON feat. WILL. I. AM, which samples the famous speech by Martin Luther King Jr, “I Have a Dream”. Every time I listen to the theme, tears well up in my eyes and I think that there is no song that matches with the movie more perfectly than this song.

In this movie, Erin succeeds in developing trust with students and also letting them believe in the power of education, but there is one thing she has to lose: her husband. While she devotes herself in teaching her students to change their lives, he gives up his relationship with her and leaves her. The movie depicts him as a kind of pathetic man who can’t understand his wife’s passion for her career.