I went to the International Women Make Sister Waves Film Festival, which was held on November 14 and 15, 2015, in Toyonaka City, Osaka. Commemorating the 45th  anniversary of women’s liberation movement, the forth Film Festival was entitled “We’re Still in the Midst of Lib!” and a total of seven documentary films were screened in two days. A special talk by the women in their 70s about “the 45 Years of Women’s Lib—Never-ending Journey on the Road of Lib—was also held, as well as discussions after screenings. The Festival had other sorts of festivities, including panel exhibition showing the women’s lib movement in Osaka and a party celebrating the movement’s 45th anniversary. 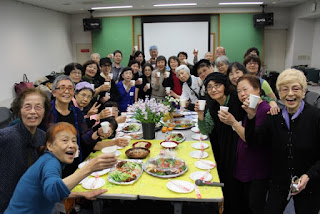 The screening program of the Festival included the premiere shows of three overseas films as follows: Spanish and Turkish films documenting feminists movements which spread in respective countries from the end of 1970s to 1980s, and a Canadian film, Lesbiana: A Parallel Revolution*, which reviewed the radical lesbians’ movement generated from the women’s lib movement in the 1970s mainly through the interviews of those radical feminists. A Japanese film Looking for Fumiko represented a dialogue between the women engaged in the 1970s lib movement and younger generations. The other Japanese film 30 years' of Sisterhood : Women in the 1970s Women's Liberation Movement in Japan was composed of  narratives of twelve women who had been involved in the lib movement in those days and have been living a life for liberation still now.

Watching these films, I felt that I could vividly re-experience the spread of various women’s movements simultaneously generated in various places of the world and the power of solidarity among individual women who spontaneously took part in the movements to let their voices heard. That was because the films were directed by women who aimed to listen carefully to voices of those women engaged in the movements. Even though their problems and difficulties were different from ours, we, who are living a contemporary life somehow with uneasiness, could receive positive messages and hopes from each of those films.

Above all, the words which I found most inspiring were those uttered by a woman in the Spanish film about La Sal in Barcelona. “For me, ‘feminism’ is uncomfortable behaviorism,” she said, “because you could never keep away from feminism as it involves the questions of your own life and identity, while you could forget about the missiles (she means other kinds of social movements) you would not take home to your bed.” Yes! I agreed to those words with much empathy.


Another impressive phrase was spoken by a women who appeared in Lesbiana: A Parallel Revolution. She said “I think it necessary that we should be connected through recognition of our heterogeneity rather than homogeneity." The linkage based on heterogeneity might not be attainable particularly in Japan where homogeneity tends to be most highly regarded. The importance of heterogeneity, however, should be better appreciated in our actual activities and movements today.