On August 28th, 2015, before massive protests around the Diet Building on the 30th, a press conference was held by “OVERSEAs-PEACE for World,” an organization of Japanese living abroad fighting against the security-related legislation, which enables the use of collective self-defense right. 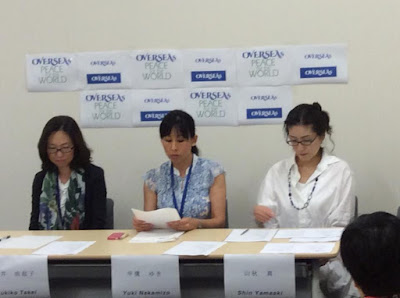 The three founders of OVERSEAs – Yukiko Takei, Yuki Nakamizo, and Shin Yamaaki --- attended the conference. Inspired by the many protesters and protest groups across the country including SEALDs, MIDDLEs and TOLDs, Takei called for the foundation of OVERSEAs in mid-August. In just a single week after its foundation, about 400 people had joined their closed group page on Facebook.

As of 13:00 on September 20th, OVERSEAs has got 2727 “Like”s on their Facebook community page (https://www.facebook.com/OVERSEAs発信版-980605138640687/timeline/) and 1,250 web signatures on their petition website (http://www.overseas-no9.net/). They are considering submitting the signatures to the Japanese consulates overseas.

In the protests on August 30th, they carried out a standing demonstration near the Diet Building holding the blue placards of OVERSEAs. Also, their supporters in Berlin and New York joined the protests with the same placards. They posted photographs of their actions on Facebook to demonstrate their worldwide solidarity.

Viewed from abroad, we can see that “Japan is safe because it is considered to be a ‘weak country’ which cannot take military action.” 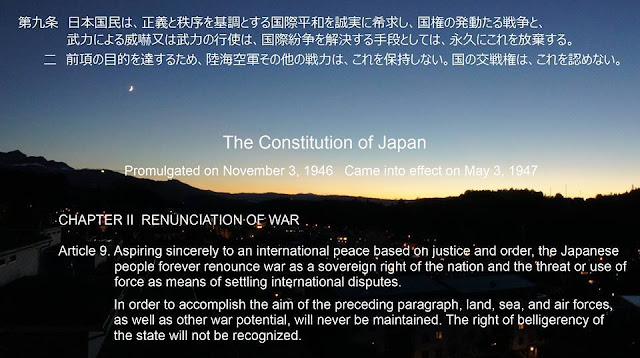 Yukiko Takei is a lawyer, who occasionally holds the “Constitution Café” events as a member of the Association of Young Lawyers Defending Tomorrow’s Freedoms, and watches over SEALDs as a member of Watching Lawyers. Having once worked for a general trading company, she says, “When you consider peace and security, you need to think about our relationships with foreign countries.”

Those who advocate changes to the collective self-defense legislation emphasize the “threat of China” and argue for the necessity of military buildup. But she questions that argument, saying, “For Japan there is no point in making war against China, which is one of Japan’s biggest trading partners.”

Takei also says, “Japan is safe precisely because it is ‘weak.’” What does this mean?

Now, the nature of wars and conflicts around the world is changing from “country against country” to “country against (cyber) terrorism.” The aim of terrorists is to defeat “strong countries” like the United States. She argues that in such a worldwide trend a “weak country” like Japan, which has abandoned arms, is less likely to be targeted by terrorists, and therefore, is safer.

It is true that modern-day terrorism is conducted in the form of guerrilla warfare, in which overwhelmingly militarily (and also politically and economically) weaker groups attack stronger powers.

This may result in those “strong countries” being forced to spend much money, and as a result, end up reconsidering their policies. That is exactly what the terrorists is looking for. Not to beat, to conquer or to rule the powers.

Takei has, in fact, seen many Americans hiding their passports trying to conceal their nationality in airports and on board airplanes. Americans are likely to be targeted just for “being Americans.”

On the other hand, Takei has been proud to show that she is “Japanese.” So far, most Japanese residents in foreign countries have lived safely without being targeted by any specific political groups, because we have not killed anyone in war with other countries for 70 years due to Article 9 of the Japanese Constitution.

However, our security notion that “we are safe because we are Japanese” will begin to disappear when Japan enhances its military power and takes part in U.S.-led wars, and rapidly so.

Since the start of the Abe administration in December 2012, ten Nikki employees were among 40 foreigners who were kidnapped and killed by pro-al-Qaeda militants in Algeria in 2013. And in January 2015, two Japanese men were held hostage and killed by the terrorist group Islamic State (IS).

In the horrible execution of the hostage Goto, IS sent a frightening message saying, “(Prime Minister) Abe, with your reckless decision to participate in an unwinnable war, this knife not only will massacre (Goto) Kenji, but also continue and cause a bloodbath where your people are. Let the nightmare begin for Japan.”

Abe responded to this with a very belligerent and risky message, though sounding-brave; “To the terrorists, we will never, never forgive them for this act … Japan will never yield to terrorism ... (and) is firmly resolved to fulfill its responsibility in the international community's fight against terrorism.” The Japanese government could not do anything when its citizens were kidnapped. It could not save them. It could hardly even negotiate with the terrorists. It revealed that it was completely incompetent in protecting the lives and security of its citizens. And yet Abe blustered, “We will never forgive IS.”

Obviously, IS will not sit by and will send more hostile messages to the Japanese government. This exchange of bitter words could get worse, but those put at a greater risk of suffering serious harm are ordinary Japanese citizens.

Actually, according to the foreign press, Jumpei Yasuda, a Japanese freelance journalist is now being held hostage by an unknown group in Syria. But there has been little coverage of it in Japan. Many people believe that the incident might have something to do with the government’s, especially Abe’s, insensitive and overbearing attitude towards the Muslim extremists.

If the new collective self-defense legislation enables the use of force by the Self Defense Forces abroad, their potential enemies will certainly include such extremists. As a result, Japanese people would be much more likely to become their “targets.” Warning that Japanese people are about to throw away the wonderful fortune they are not even aware of owning, Takei and her partners say, “We are strongly against the collective self-defense bill which will never be conducive to peace in Japan and the world. We should contribute to the world through culture and economy, not military force.”

Original article written by Independent Web Journal
Translated by A. Tawara
Posted by w-wan at 2:34 PM